Our laboratory now has a small core shooting machine, which is used to support and develop GEOPOL® W TECHNOLOGY – curing by heat of core box and warm air.
An aluminum corebox is installed on the core shooter for three test specimens for bend test. The core box is heated through steel plates by electricity. The core shooter has an additional device that allows to harden the test specimens by blowing warm air. The fact that it is now possible to produce test specimens directly on the core shooting machine has brought a significant approximation to the real production of cores. In addition, it is possible to produce a large number of test specimens in a relatively short time, which significantly speeds up the entire testing process. 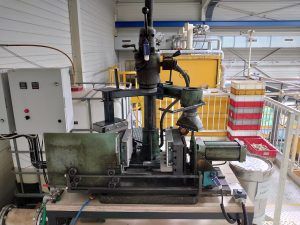